By Lindsey Scharg
Posted October 9, 2020
In Uncategorized
September 2020 Fire Report: Scrap Metal Fires Surge!2020-10-092020-11-03https://firerover.com/images/FireRover-Logo-Web-3.pngFire Roverhttps://firerover.com/wp-content/uploads/2020/10/sept.png200px200px
Scrap metal fires surged during the month of September, contributing to the second-highest number of monthly incidents since I began reporting waste and recycling fires in February 2016. Throughout the COVID-19 pandemic, the waste, paper and plastic facility fires made up a larger percentage of the total fire incidents each month when compared to historical data. In September, however, the tables were turned. We experienced 28 waste and recycling facility fire incidents; scrap metal fires made up 57 percent of these fires. If you include e-scrap, it increases to 65%.  At Fire Rover, we extinguished 12 fires at our clients’ facilities; eight of those fires were at metal recycling operations, originating in either the light iron piles or auto shredder residue (fluff) piles. 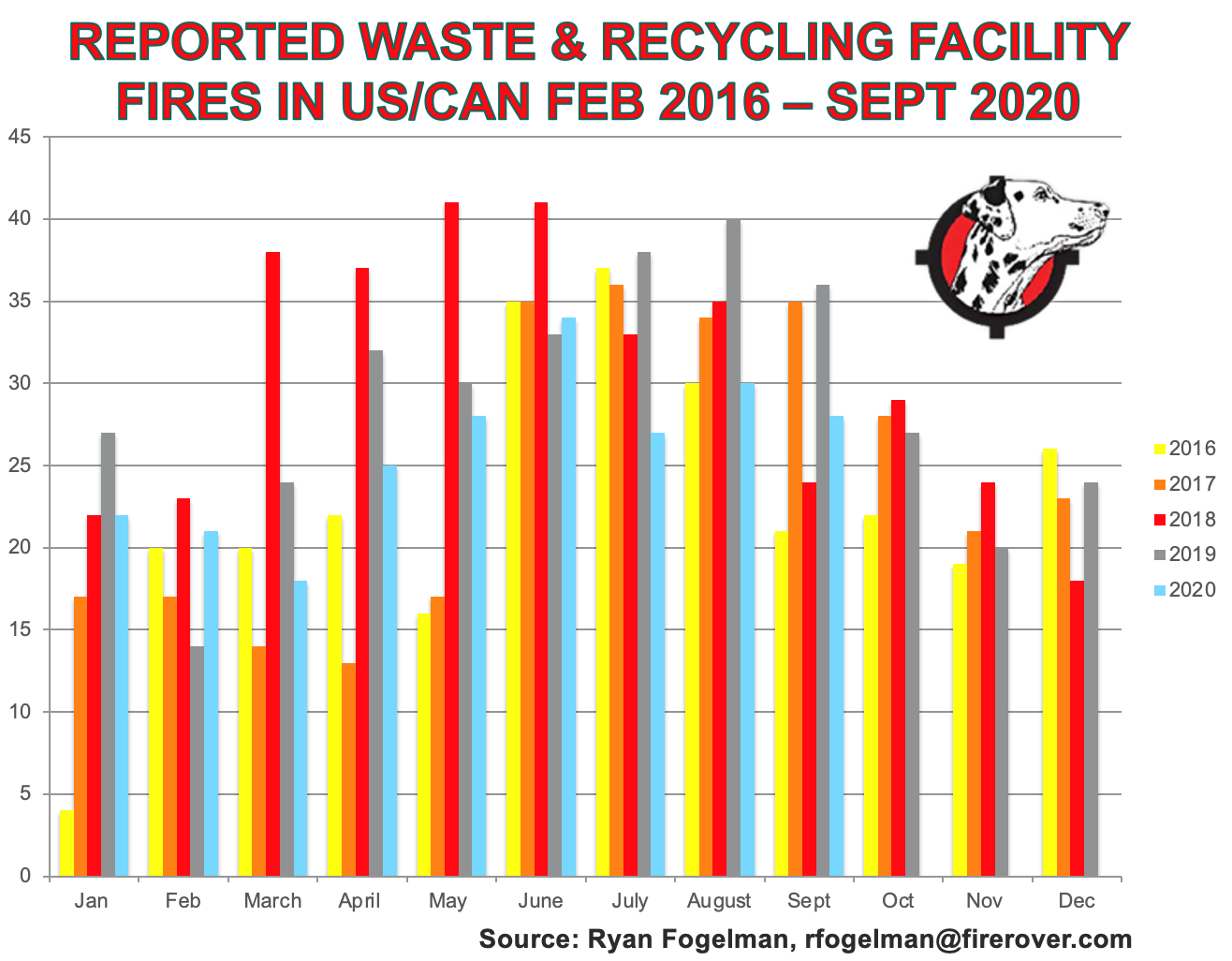 During the past 12 months, the waste and recycling industry has experienced 302 reported facility fires in the U.S. and Canada. Additionally, we incurred 20 reported injuries and four deaths that can either be directly or indirectly attributed to these fire incidents.Based on reasonable assumptions, we can extrapolate that 1,800-plus facility ﬁres have occurred during that time, which, based on the number of facilities reported by the Environmental Research & Education Foundation, is more than 40 percent of the industry. I define “reported facility fires” as any fire that has been reported by the media that occurs at a waste or recycling facility in the U.S. and Canada. Typically, the fires that are reported by the media are larger fires that require fire professionals to arrive on the scene and where there are effects that the public can witness.

­­Some local media outlets give the scrap metal industry a bad rap, and that’s mostly because they don’t fully understand our complex industry. Many scrap yards are family owned and have been in business for decades—some have even hit the century mark. Methodically, many metal recyclers open scrap yards near industry and in urban areas, but some that started in sparsely populated areas have had communities build around them over time—only to then file “nuisance” complaints against them.

The public has a true belief that metal recyclers are dirty, noisy, can cause the ground to “shake” when they have controlled explosions and so on. When major fire incidents occur, they exacerbate the problematic perception the industry faces. Scrap fires can last for days— producing thick black smoke that fills the surrounding area and causing orders for the public to keep their windows shut, stay inside or, in bad cases, evacuate. At Fire Rover, our job is not to prevent 100 percent of fires but to prevent major fire incidents from occurring 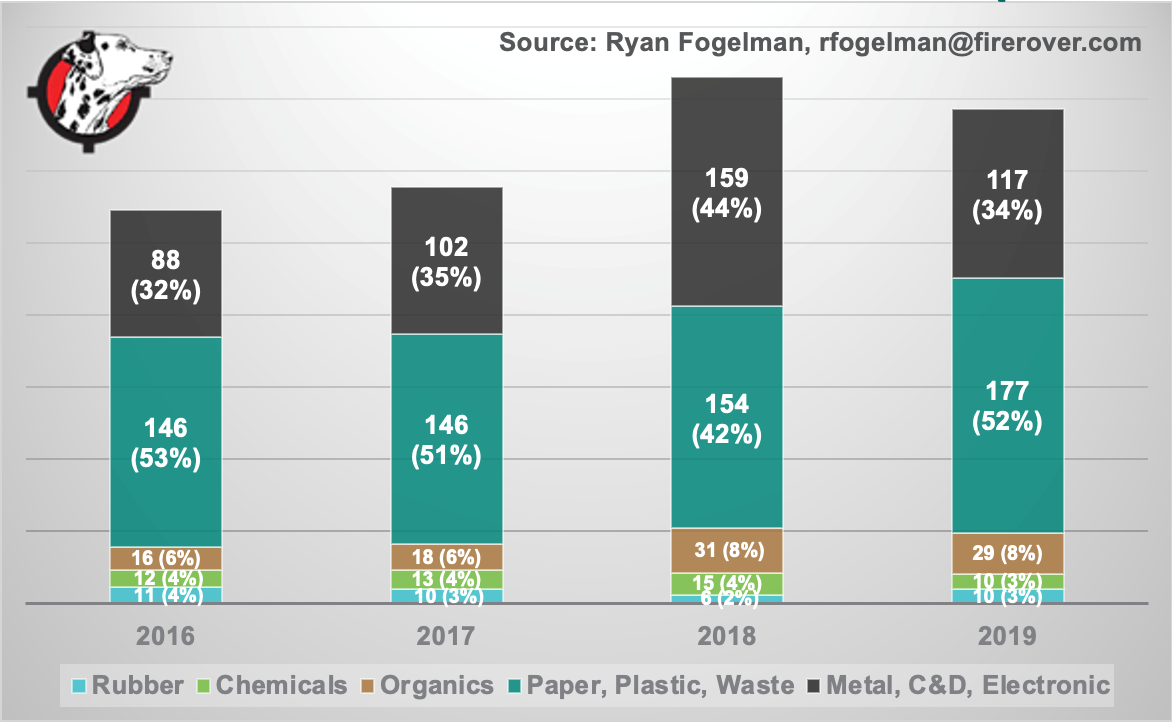 As you can see from the chart above, 2018 was a banner year for fire incidents at our scrap metal operations. Metal, construction and demolition (C&D) and e-scrap fire incidents jumped to 44 percent of all fire incidents that year—making it the year that opened the eyes of the industry, insurers and operators across the globe. Most of the increase was due to the proliferation of lithium-ion batteries and electronics in our recycling streams in combination with the traditional fire risks we have always experienced in scrap metal processing when pressurized tanks get pinched, fluff piles spontaneously combust, etc.

To solve the problem of increasing fire frequency in the waste industry, the waste associations, along with their largest operators, have focused on operational excellence and proper prevention plans as well as public education and investment in technology. Whereas, the scrap metal industry has focused solely on operational excellence and proper fire planning to alleviate the problem—neglecting to invest in new fire technologies to stem the tide of fire incidents. As I have said a number of times in the past, “When good operators are still having fires, new solutions outside of prevention are needed.”

In 2019, the Institute of Scrap Recycling Industries (ISRI) published a fantastic, forward-thinking fire prevention and management plan to help with the prevention stage of scrap metal operations. ISRI’s plan provided a solid blueprint on developing industry best practices when dealing with fire prevention.  It even outlines strategies for dealing with incipient stage fires, but there was one key difference in the way the municipal solid waste and recycling industry handled the problem versus the scrap metal industry.

The leaders within the scrap metal industry have not made the investment in fire suppression technology that is required to stem the progressing forces that are at play as our cars, appliances and more continue to have electronics as part of their design. Therefore, electronics, along with the small footprint of lithium-ion batteries, have been having increasing effects on fire incidents at our facilities.

And, to be clear, this statement is not made in jest. I realize the ramifications, but what I want to make abundantly clear is that the insurance companies are seeing the same things. They make their underwriting decisions on real claims data and they don’t care or listen to what the media is saying. In fact, I started talking about the fire epidemic in the waste and recycling industry in 2015, and it took the insurers until 2018 to see their claims spike, and we are now seeing higher premiums across the industry.

We have seen an improvement from 2018’s spike in scrap metal fire incidents due to better prevention, but there is more to be done. Before 2018, we all assumed that these fires were isolated incidents pertaining to auto shredder residue; however, the same risk exists for any scrap dealer who buys light iron, cars or other materials containing electronics. It is impossible to know what material is in every single truckload entering your yard, regardless of the protocols and rules in place.

While the Fire Rover solution isn’t the answer to all of these problems, early detection solutions like ours do provide early detection and elimination of fires in high-hazard areas at scrap metal facilities. It only takes one fuel tank that was not drained all the way or one battery that was not extracted to cause a major fire incident, which is why you cannot complete a fire plan with merely best practices for operations. You have to integrate the technology that can proactively work to stop these fires.

Take a look at this video of an incident that occurred at one of our clients’ operations during the summer. A material handler is unloading a trailer of light iron; the grapple ignites a partially emptied fuel tank and causes an explosion. In reaction, our remote agent works quickly with the machine operator to extinguish the fire. Our client’s site is located in a residential neighborhood, so it was important to deal with the incident safely and quickly so nearby residents weren’t alarmed.

Contrary to scrap yards located in densely populated areas, many scrap yards are situated in areas with fire departments that are dispatched from far away or often unequipped to deal with these types of fires. Not all cities and fire departments are provided with the equipment or training needed to combat heavy industrial fires, with many departments made up of volunteers. Due to these issues, companies need to invest in the proper equipment, either for the fire department to use or for trained employees to use, that includes fluorine-free Class D agents that can have a very real effect on suppressing these fires early and protecting collateral assets. 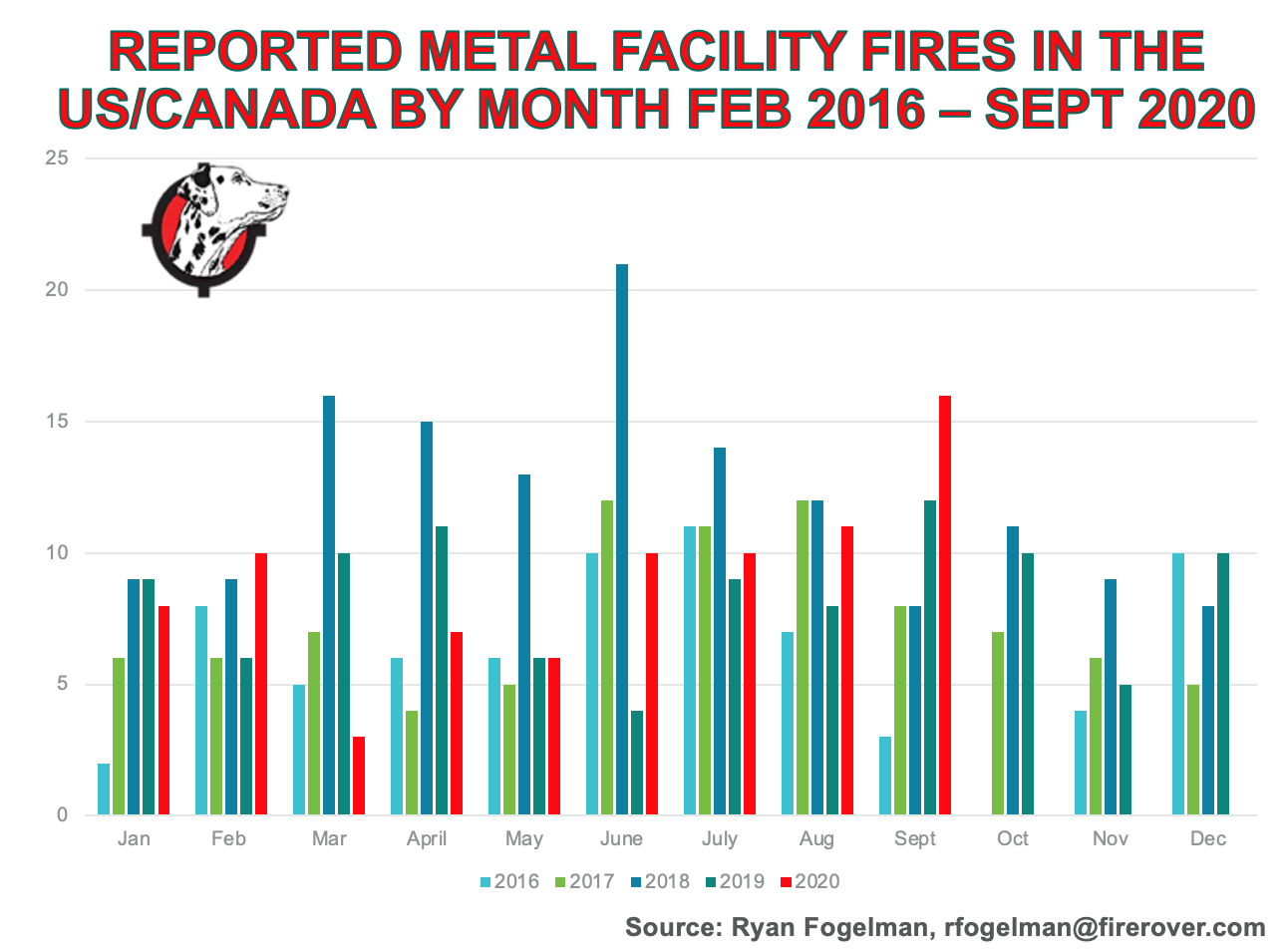 As previously noted, this month, we saw the second-highest number of fires at scrap metal facilities than we have experienced in the past five years I have been tracking the reported fire data. And to those of you who believe that these are just fires from “poor operators” used to inflate the number, you couldn’t be more incorrect. These are fires from the largest operators in the industry that have a history of repeated fire incidents at these sites. Prevention helps, but it’s not the answer. We need real investments in fire protection solutions to solve this ongoing threat to our industry—keeping the insurers in check and allowing the scrap metal industry to continue to increase the amount of tonnage that gets recycled versus being thrown into a landfill for the next century